Narrative is an account of a sequence of events, usually in chronological order. Relating to kinds of text, which student has to complete studying in high school, narrative is a text which retells the story or previous experiences. The purpose of the text is to entertain or amuse readers or listeners about the story.
Narrative is basically story and within this, story telling, there are many kinds of narrative - comedy, mystery, romance, horror are some of the commoner types. A poem can also be a narrative if it tells a story rather than just describing something.

SNOW WHITE
A long time ago, a child was born to a queen and king and she was called Snow White.  When the queen died, the king married again.  This new queen was wicked and hated Snow white.  The queen gave orders that Snow White was to be treated as a servant.Snow White grew very beautiful and one day a Prince riding by, saw her at work and fell in love with her.The queen was beautiful too, and every day she asked her Magic Mirror, "Who is the fairest in the land?" and the mirror always answered, "You are the fairest one of all".But one day the mirror answered Snow White was the fairest in the land, and in a rage the queen gave orders to one of her Huntsmen to take Snow White into the woods and kill her. 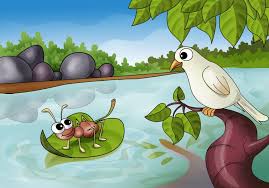 One hot day, an ant was searching for some water. After walking around for some time, she came to a spring. To reach the spring, she had to climb up a blade of grass. While making her way up, she slipped and fell into the water.

She could have drowned if a dove up a nearby tree had not seen her. Seeing that the ant was in trouble, the dove quickly plucked off a leaf and dropped it into the water near the struggling ant. The ant moved towards the leaf and climbed up there. Soon it carried her safely to dry ground.

Not long after at that time, a hunter nearby was throwing out his net towards the dove, hoping to trap it.

Pinocchio
Once upon a time, there was a puppeteer named Geppetto. He really wanted a boy but his wife has been died for a long time ago. One day, he had an idea. He wanted to make a puppet so he would never felt lonely again. He made a puppet all night without resting. In the morning, finally he finished his work. He named the puppet, Pinocchio. He played whole day with Pinocchio. However, he felt lonely again because Pinocchio couldn't talk or walk by himself. In the middle of the night, Geppetto prayed to the God. His wish was Pinocchio became a real boy, human. He thought it on his mind in his dream.

In the next morning, he surprised. Pinocchio was alive. He really was happy. He tough Pinocchio how to walk, how to speak, how to read etc. like a teacher. Pinocchio learned fast. He entered an elementary school. One day, Pinocchio felt bored. So, he went home late. Geppetto worried about him. When Pinocchio came to home, Geppetto asked him. He said he was on school but he didn't. Suddenly, Pinocchio's nose grow longer. It meant that Pinocchio lied.

The next day, Pinocchio got caught by thieves. The thieves was the owner of circus. Pinocchio became a slave for the circus. He was famous because he was a talking puppet. Geppetto worried him. Pinocchio didn't come home for 2 days. He found Pinocchio everywhere. When he discovered the sea, big wave smashed him. He was on whale's stomach when he awoke. He couldn't find the way out.